Below are some tips for bunch riding in a large group or Peloton. To many road cyclists these tips are very familiar but if riding with unfamiliar bunch buddies it doesn’t hurt to make sure everyone is working together and on the same page.

Often a cyclist will be be riding in a smaller group, which will require the rider to take a turn leading the group alone and not with a partner (as described below). In these instances the same rules would apply.

Be predictable with all actions
Avoid sudden braking and changes of direction and always try to maintain a steady straight line. Remember that there are riders following closely behind.   To slow down, gradually move out into the wind and slot back into position in the bunch when you have less speed. By putting your hands on the hoods on your brakes you can “sit up” and this will allow your body to slow you down by utilizing the wind resistance.

Brake carefully
Ride safely and try to stay off the brakes. If you are inexperienced or a little nervous about riding too close to the wheel in front of you, stay at the back of the group, gain confidence and practice your bunch riding skills.

When the pace eases don’t brake suddenly, instead ride to the side of the wheel in front of you and ease the pedalling off, then ease back into position again behind the wheel ahead. Practice on the back and soon you will be able to move up the line with a partner.

Rolling through – swapping off – taking a turn
The most common way to take a turn on the front of the group is for each pair to stay together until they get to the front of the bunch. After having a turn on the front (generally about the same amount of time that everyone else is taking) the pair separates and moves to each side (left and right or the right side if your riding at the front alone), allowing the riders behind to come through to the front. To get to the back of the peloton, stop pedalling for a while or ease off to slow down, keep an eye out for the end of the bunch and fall back into line there. It is safer for everyone if you get to the back as quickly as possible.

Be smooth with turns at the front of the group
Avoid rushing forward (surges) unless you are trying to break away from the group. Surges cause gaps further back in the bunch which affect the riders at the back as they have to continually chase to stay with the bunch.

No half wheeling
When you finally make it to the front, don’t ‘half wheel’. This means riding half a wheel in front of your partner. This automatically makes your partner speed up slightly to pull back along-side you. Often half wheelers will also speed up, so the pace of the bunch invariably speeds up as the riders behind try to catch up.

Choosing when to come off the front
You and your partner need to do some planning when you get on the front so that when you roll through you come off at a place where the road is wide enough for the group to be four-wide for a short time. With some planning, it is often possible to come off the front a few hundred meters earlier or later to avoid a dangerous situation and avoid unnecessarily upsetting motorists.

Pedal downhill
Pedal downhill when at the front of the bunch as cyclists behind you will not want to ride with their brakes on constantly.

Point out obstacles
Point out obstacles such as parked cars, loose gravel, broken glass, holes, rocks or debris on the road, calling out “hole” etc as well as pointing is helpful in case someone is not looking at your hand when you point. It is just as important to pass the message on through the group, not just letting those close to the front know.

Hold your wheel
An appropriate gap between your front wheel and the person in front is around 50cm. Keep your hands close to the brakes in case of sudden slowing. Sometimes people who are not used to riding in a bunch will feel too nervous at this close range – riding on the right side is generally less nerve-racking for such people as they feel less hemmed in. Watching “through” the wheel/rider in front of you (to one or two riders ahead) will help you hold a smooth, straight line.

Don’t leave gaps when following wheels
Maximise your energy savings by staying close to the rider in front. Cyclists save about 30 per cent of their energy at high speed by following a wheel. Each time you leave a gap you are forcing yourself to ride alone to bridge it. Also, riders behind you will become annoyed and ride around you. If you are in the bunch and there is no one beside the person in front of you, you should move into that gap (otherwise you will be getting less windbreak than others around and behind you).

Don’t overlap wheels
A slight direction change or gust of wind could easily cause you to touch wheels with the rider in front and fall. It is nearly always the following rider that hits the deck.

Riding up hill
Many riders, even the experienced ones, freewheel momentarily when they first get out of the saddle to go over a rise or a hill. When doing this, the bike is forced backwards. Many riders often lose their momentum when rising out of the saddle on a hill which can cause a sudden deceleration. Following the wheel in front too closely when climbing may result in you falling.

Look ahead
Do not become obsessed with the rear wheel directly in front of you. Try to focus four or five riders up the line so that any ‘problem’ will not suddenly affect you. Scan the road ahead for potential problems, red lights etc, and be ready.

Obey the road rules
Especially at traffic lights – if you are on the front, and the lights turn orange, they will definitely be red by the time the back of the bunch goes through the intersection. You will endanger the lives of others if you run it.

Lead in front
Remember when you are on the front, you are not only responsible for yourself but everyone in the group. When you are leading the bunch, try to monitor potential problems and give plenty of warning of impending stops or changes of pace. Make sure you know where you are going.

When out on the road, communication is one of the keys to the safety of all riders in a group. Sometimes a shout is necessary but often a rider at the front of a group will be facing away from those behind and will use hand signals to indicate hazards or recommended actions to those behind.

Knowing what signals to use and what they mean is essential when riding in any group.

Shown below are some of the most commonly-used signals and what they mean:

HAND SIGNALS ON THE ROAD

A flat hand motioned up and down by a rider indicates slowing or stopping for an obstacle or hazard ahead. This is also used for approaching horses who may startle at a bunch of cyclists approaching quickly. 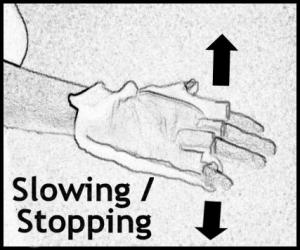 A finger pointing at the road indicates a pothole, cover or fixed hazard on the road surface. Used with or without a shout of ‘hole’ or ‘cover’. 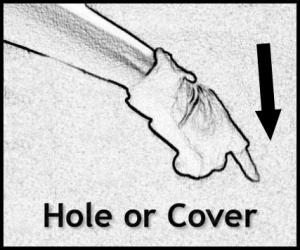 A flat hand with fingers spread that is waved over the road surface – with or without a shout of ‘loose’ – indicates a loose surface (ie gravel, mud etc) that could cause loss of traction. 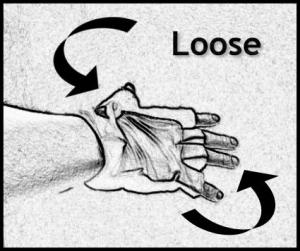 A rider pointing or waving behind their back is indicating that riders behind should move out (or if mirrored, in) to avoid a pedestrian, parked vehicle, slower cyclist, on-coming vehicle crossing white lines etc. 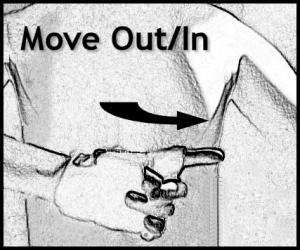 It is always a good idea to ‘shout out’ hazards as well as indicating them. Often a rider at the back of a group will shout out ‘CAR BACK’ to warn the group of traffic coming up behind the group and ‘PASSING’ when a vehicle behind a group is coming through.

Similarly, ‘CAR UP’ indicates to a group that a car is approaching in the opposite direction and riders (particularly on narrow roads) may need to keep tight on their side of the road.

As indicated above LOOSE is a shout indicating a loose surface such as gravel, broken tarmac, chippings or any surface that might cause loss of traction in dry weather.

‘STEADY‘ or ‘EASY‘ is a warning for everyone to slow down – it could be a Give Way, a road junction with car coming, a vehicle in front slowing down or just the ride leader giving stragglers or those left behind at a junction the chance to re-join the pack etc.

When turning at a T junction, ‘CLEAR’ is an indication that the road is completely clear in both directions. If riders are turning left, ‘CLEAR RIGHT’ indicates that there are no vehicles approaching from the right of the junction so a left turn is possible. BUT PLEASE NOTE: A shout of ‘clear’ is never ever a justification for not checking and pulling out. It is every rider’s responsibility to ensure the road is clear for them. These shouts are for assistance and smooth flow NOT guidance as to what you should or shouldn’t do. Cars can come round corners quickly and clear one minute might be busy when you reach the junction. ‘STOP‘ is a command to stop at the junction because of traffic or hazards.